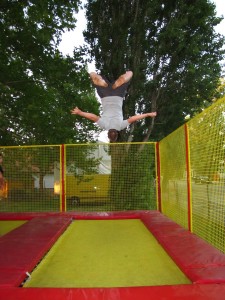 Trampoline parks have become more and more popular in recent years as these relatively inexpensive and incredibly fun centers have been popping up all over the place, especially in the suburbs of major cities. They tend to not only be fairly cheap and especially good for small children to help them burn energy and calories, but they are also fairly simple to set up for entrepreneurs.

But like with many new things, fears regarding the safety of the activity have become a major concern. In most cases, these fears are overblown, especially considering that parents have little trouble allowing their children to play football and basketball, both of which have a higher injury rate than trampolines.

Like with football and basketball, there are simple safety regulations and techniques that can be employed to significantly lower the risk of injury.

This could have been avoided if he simply spread out his arms and legs, making his body as large as possible. This increases air resistance on the way into the pit, slowing you down. Moreover, it spreads out the energy from the flight to be distributed among the foam blocks, making sure that you get a soft landing. You should never jump off a trampoline using a diver’s form, nor should you ever jump head-first.

Again, it’s important to understand that there are much fewer injuries at trampoline parks than in other organized sports. They are no more dangerous than any other activity. There are still new enough that people who partake in this activity that may not yet know how to keep themselves safe, though.

If you follow the above advice, you can have a great time at any trampoline park and not have to worry that you’ll get hurt.