The image that most people have of the trampoline is a raised mat strung on a frame with springs. Whether it be half a foot or several feet off the ground, the idea is generally that it is held up on stilts of some sort with a decent amount of air beneath it.

That being said, a number of people are worried that a trampoline will ruin the look of their yard and have considered built-in or in-ground options to replace the much higher versions. While this will reduce the profile of your playing equipment, it’s not necessarily the best idea, however. 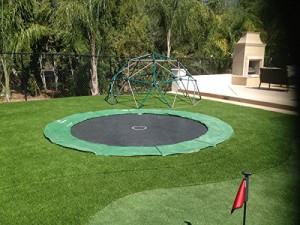 While it sounds like a good idea, there are a number of misconceptions about built-in trampolines that stem from assumptions that don’t really match the reality of the situation.

The first thing to understand is that if you are going to install a built-in trampoline, you still need a safety net. The netting is not just to protect people who might fall off because of the five to six foot rise in the trampoline itself. Remember that people using this device are jumping very high in the air, sometimes six or seven feet up with a good bounce. There is little practical difference between falling from a height of six feet and twelve feet onto hard ground. In both cases, you won’t be in total control of your fall, so it’s still just as easy to fall poorly and do serious damage.

Further, in-ground trampolines, if they are installed properly, should have a retaining wall to prevent dirt from filling the area under the rig. That means a ring of concrete surrounding the trampoline that can be landed on with a bad jump.

Another misconception about built-in trampolines is that they are easier to maintain. Unfortunately, once the rig has been sunk into the hole, you have lost access to most of the parts and can do very little to inspect for safety or fix something that has broken.

The other problem with a built-in trampoline as opposed to a raised one with a proper safety net is that if there is not enough room dug beneath the mat, it will not be very springy. Part of what makes a trampoline work is that the downward force pushes air out from underneath it, so when that air rushes back in to create equilibrium, it gives you an extra push. This is why indoor mini-trampolines aren’t nearly as bouncy as large outdoor ones that are several feet off the ground. Without proper ventilation and a lot of air under the mat, it won’t bounce very well and may be very little different from a hard surface.

Further, because there won’t be direct sun to dry the trampoline pit, you need to make sure that you have sufficient drainage to prevent water buildup that can result in damage to the trampoline and, in some areas, provide a breeding ground for mosquitoes.

Solutions for a Raised Trampoline 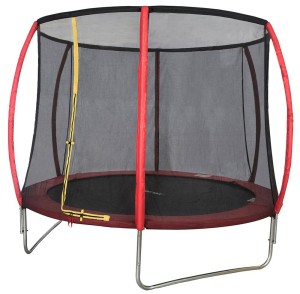 Just because a trampoline is easier to notice doesn’t mean that is has to be ugly or ruin the look of your yard. Consider planting a garden around it with tall plants to partially hide the base. You can also decorate the frame so that it becomes a part of your yard rather than just a piece of playground equipment.

More trampolines these days are made in a variety of colors that better match a yard, like hunter green or other Earthtones. While they won’t make your trampoline disappear, they will help it blend more readily into the area.

If you are determined to have a built-in trampoline, make sure that you hire a professional landscaper or general contractor with experience in building these sorts of pits to make sure that it will drain properly and has enough ventilation to get solid bounces. Finally, even if you have to take it down and set it back up every time you use it, get a safety net and make sure that nobody bounces when it’s not up, especially since if you decide it’s too dangerous, you’ll have much more trouble getting rid of a built-in trampoline.