So, you’ve decided to get a trampoline and think that an in-ground one might be the best option for you. Whether you’re afraid of injury, think that your yard looks better with one, or think they’re easier to maintain, you may find that you’re not quite correct. That being said, there are advantages and ways that you can address some of the biggest concerns that come with an in-ground trampoline.

Top Rated Trampolines to Check Out

Before getting to the pros and cons of in-ground trampolines it might be helpful to see some of the top rated trampolines available on Amazon. 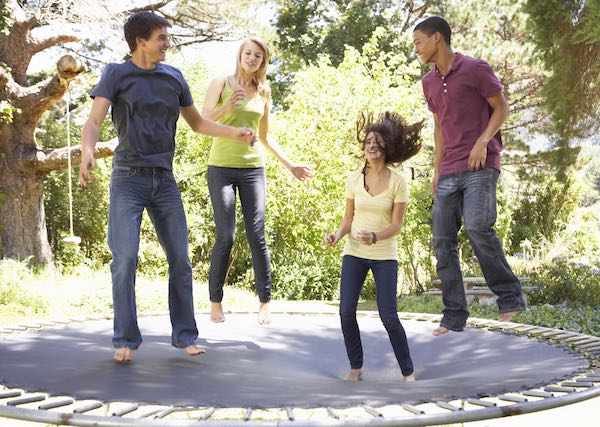 The first thing that you have to understand is that in-ground trampolines are not inherently safer than ones up on stilts. Keep in mind that the purpose of a trampoline is to launch a person several feet into the air, sometimes up to as high as 10 feet off the ground. If you fall off the trampoline and hit the ground from that height, you can still hurt yourself.

You also will need to consider that maintenance isn’t easier just because you don’t see the parts that need to be maintained. It’s still important to make sure that the stilts that prop your trampoline up to ground level are not rusted or broken, that they remain upright and don’t poke through any rubber stoppers at the bottom. The underside of your trampoline will continue to need attention, meaning that you’ll have to occasionally lift the rebounder out of the ground (they can weigh between 100 and 500 pounds) to make sure everything is in top shape.

This isn’t to say that in-ground trampolines are not great and can’t be incredibly fun, but they do require more work than most people assume.

There are a number of benefits to an in-ground trampoline.

For one, it’s a lot easier for small children or older adults to get into and out of. While you can add step stools and stairs to most above ground ones, it still requires a fair amount of climbing and can be especially difficult when somebody is already bouncing on the mat.

Secondly, there are a number of decorative ideas that are not available to above ground trampolines which can make your rebounder into an integral part of your back yard landscaping. While above ground models are not completely incapable of being decorative, the in-ground ones open themselves up to more options.

There are several other advantages as well, but many of them are aesthetic or up to personal preference.

When installing an in-ground trampoline, the first thing to consider is the size of the hole that you want to dig. While it would seem the obvious answer is “the diameter of the trampoline,” keep a few things in mind.

Second, remember that in-ground trampolines are not inherently safer than above ground ones, which means you’ll likely want to have a net surrounding it, or at least have the ability to set one up when you’re about to use it. That’s going to add to the size of your hole by several inches.

The best option is to take nets into account, then add a few more inches to the diameter on top of that to give yourself a bit of a “moat” to work with.

After you dig your hole, you’ll have to add a retaining wall. The best retaining walls are made of stone blocks or concrete that you’ve poured yourself. Again, remember the extra space that you need for your net and accessing the pit when you’re figuring out where to set up your retaining wall. Sturdy wooden walls can also work, but are more likely to collapse or rot over time.

While working out your retaining wall, you also want to keep two things in mind: ventilation and drainage.

If you don’t work out how to drain your pit, eventually you will have a pit full of stagnant water which can lead to insect infestations, rusting of stilts, and rotting of the mat. Keeping the bottom of the pit dirt can be somewhat helpful as water might sink into the ground, but it could take days, weeks, or longer for that to happen, if it does at all. Remember: lakes also have dirt bottoms but don’t go anywhere.

Figuring out drainage is not incredibly difficult and there are a number of solutions available online. Some manufacturers even will include instructions with their trampolines.

Similar to drainage, you have to keep ventilation in mind. Air, while it doesn’t seem like much, is a substance. In an above ground trampoline, when you land on the mat, the air underneath is pushed out on all sides, then comes rushing back in when you jump again. If you don’t give the air under the mat space to rush out quickly and make room for the mat coming into that space, then your in-ground trampoline will be about as bouncy as the grass next to it.

Leaving a moat around your trampoline as discussed above is a good way to provide some ventilation, though it may not be enough. Similarly, digging your pit slightly shallower than the height of your trampoline will mean that the trampoline isn’t flush with the ground, but it will provide more space for the air to enter and exit.

One solution that many people have used is installing pipes that lead from the pit to the outside. This requires more digging and can involve a more complex retaining wall, but it also allows you to better control how much air enters and exits the pit. The pipes will require frequent cleaning to ensure they aren’t clogged, but covering them in mesh will filter out a lot of the worst debris while allowing air to flow freely. Still, it’s important to make sure that the pipes remain clean at the top as well.

If you don’t feel comfortable with all of those installation steps, you can work with a general contractor or landscaper, who will have the equipment and expertise to help you get the kind of setup that you’re looking for.

The truth is, in-ground trampolines are difficult to install and maintain. They don’t necessarily have the benefits that they are reputed to and the one arguable point, that they are less intrusive on a yard, can be countered with hundreds of examples of back yard trampolines which have been decorated to match the decor beautifully.

If, however, you do want an in-ground trampoline, make sure that you make the effort to install it properly and take the same safety precautions that you would with an above ground model.

What Is Lymphatic Drainage And Why Should You Care?