Is There a Safest Trampoline For Kids? 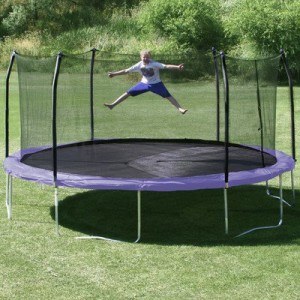 As a parent, I wanted more than anything to make sure that when my kids were playing that they were also safe. Buying a trampoline has unquestionably been a net benefit for my family, but looking for a safe one was not easy. In fact, when I started looking to find the safest trampoline for my kids, I was somewhat surprised by the results.

There are so many safety measures that are available for modern trampolines. In fact, in recent years the percentage of incidents relative to the number of available trampolines has shrunk enormously as compared to previous years. Much of this can be attributed to new industry standards and safety equipment that has become a significant part of how these items are sold.

That so many new trampolines had safety nets, for example, was a major reason why I felt comfortable enough to actually buy one. Extra padding along the metal parts was also a major selling feature for me as was a removable step stool so that I could be sure that my littlest ones couldn’t get onto the pad without my say-so.

The improvements in safety continue to work their way into the industry, making trampolines more and more reliable. Some of them like changing the spring system to get rid of sharp metal ones and replacing them with flexible rods under the pad are still fairly limited, but more often you’re seeing nets, padding, stabilizers, and related measures just being a part of how these products are made.

That all being said, this is also part of the problem with finding the safest trampoline: they’re all using the same safety measures, so it’s difficult to decide which company or model does them better. I couldn’t tell, when I started, which company had a better safety enclosure. I didn’t know that how they are fastened makes a difference, but that that difference might also not really be that important. All I knew was that everybody was doing the same things and I could still read about injuries happening.

What Causes Those Injuries?

When I started to look more deeply into things, I realized that the injuries that I was seeing weren’t really the results of lax safety on the part of manufacturers. Sure, they are always looking for ways to make things safer, but ultimately the resulting damage often came down to user error.

Since I began really delving into this topic, I have seen a lot of trampolines and, more importantly, a lot of manuals. Almost all of them have a detailed list of Dos and Don’ts for safe use of their product. Many of these are easy to figure out (e.g. don’t bounce intoxicated, don’t let children bounce unsupervised, don’t bounce on a damaged trampoline, etc.), but many others are not only not considered by parents, they might even be ignored.

For example, trampoline manufacturers almost universally advise that no more than one person bounce on the mat at a time. Some will permit two people if the trampoline is big enough, but otherwise this just isn’t recommended. Unfortunately, parents will allow five or six kids to jump at once, deforming the mat and often resulting in mid-air collisions that could cause serious head injuries. No matter how good the enclosure is and how soft the padding around the edge, that will still cause major harm.

If I had to say, then I would say that the safest trampoline is the one that is properly supervised and has kids following the rules. However there is no “safest trampoline” in terms of being manufactured to be less prone to cause injuries than any other. Instead of looking for technology to keep your kids from injury, you’re better off just being involved in their play.