Our Review of the Skywalker 15 Foot Backyard Trampoline 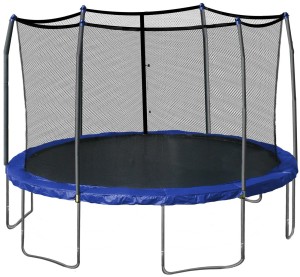 When it comes to safety and fun, Skywalker has made itself stand out from the crowd on a number of levels. This was absolutely a concerted effort on the part of the company and it shows with every product that they release. This is no less true of the 15 foot Backyard Trampoline.

Benefits to Buying This One

There are a number of pros to this particular trampoline that set it above most others in its size and shape.

First, let’s take a look at the available safety features. The Skywalker 15 foot has the following:

– A safety net with excellent fixtures to make sure that it can handle even a significant amount of weight being thrown at it.

– Reinforced t-sockets in the frame and upper enclosure to prevent twisting caused by use.

– Button hole feature to attach netting to mat so as to prevent any holes that a bouncer can slip out of on their descent.

With those in mind, it’s also good that all of the parts have additional UV protection to keep them in good shape and reduce the amount of maintenance that you’ll have to do.

The mat itself is really well constructed and gives a good bounce, especially combined with the significant clearance under the trampoline to give plenty of room for air to move.

The size and shape are both nice, with the circle creating a fairly innocuous footprint on the lawn while still being large enough for heavy jumpers to be safe. It weighs enough that regular wind will generally not be able to flip it, nor will overzealous jumping, though it couldn’t hurt to have additional weights handy for extreme weather.

The net is actually excellent and manages to hold up to some pretty extreme testing. Extended tests on the material have shown that it can deal with rain, wind, and sunshine pretty well for quite some time in normal backyard conditions, so you won’t have to worry about taking it down and putting it back up too often.

Finally, the padding on the outside does an steady job of covering the springs without encroaching on the actual bouncing space. It’s thick and soft, perfect for preventing head injuries due to landing poorly on the frame and protecting feet from jumping onto sharp spring ends.

Problems with the Item

As good as the Skywalker 15 Foot Backyard Trampoline is, it isn’t perfect. There are a few flaws that should be addressed.

First of all, the documentation on it is miserable. Whoever wrote the instructions was clearly so familiar with the process of setting one up that they assumed that the end user would have information that they obviously don’t. For example, it doesn’t mention that you have to make sure that the net is attached to line up with the enclosure entrance. While this may seem obvious, most other trampolines have enclosures that the net can be turned any way and still fit.

Actual assembly is much more difficult than it has to be. Partially this is because the instructions are so poor, but partially it’s that some of the pieces are machined just slightly off. Not enough that they don’t correct themselves by the end, but enough that it can make assembly difficult if the hands and muscles trying to force pieces together are not strong.

One problem noted by some users is that their product iss coming without all of the available pieces. While this is inevitable with any sufficiently large company, it happens more often than it really should. Combine that with a customer service department that may be overburdened in the high season, and you may find yourself the winner of a particularly frustrating lottery.

However, once you get it assembled, this Skywalker 15 Foot Backyard Trampoline is one of the finest rebounders on the market. It’s well designed, long lasting, and has safety as a number one priority. If I were to list my favorite parts, it would be as follows in no particular order:

The only real problem is actually getting it assembled and having to deal with the company which needs to look at their service policies or improve their boxing operation.

All in all though, you’re looking at a great trampoline that will last a while and keep your family safe.