US Olympic Trampolining – An Overview 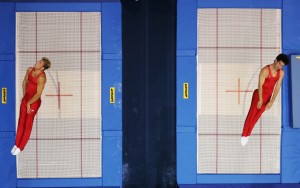 It may seem like a joke, but Olympic Trampolining is actually a sport, one that is fiercely competitive and very difficult to master. In fact, the history of the trampoline is in many ways a history of forgotten athleticism, one where an attempt to create a new medium that would improve the human body and excite people with new concepts didn’t quite take off as expected.

The modern trampoline was invented in 1934 by George Nissen and Larry Griswold at the University of Iowa. From the very beginning, Nissen and Griswold saw the sporting opportunities that this new invention held and developed a number of games that could be played on their stretched membrane device for spectator entertainment. One of them, Spaceball, involved two teams of two people bouncing on the same trampoline with a wall at each side and one in the middle with holes in it. The objective was to throw a ball through the middle wall and hit targets on their opponents’ wall for points while maintaining a constant bounce. This and other trampoline games never caught the public’s attention, but that didn’t prevent the device from being used in sports and astronaut training for decades afterward.

The 2000 Sydney Olympic Games introduced trampoline as an event for the first time, opening up two events: a men’s and a women’s. In this case, Trampoline was a subset of gymnastics, in which competitors would perform acrobatic feats while bouncing in the air and be graded on degree of difficulty, artistry, and adherence to game rules.

The sport is overseen by the Federation Internationale de Gymnastique (FIG), the international governing body that oversees all gymnastic competition and determines the rules and formats for Olympic participation.

An Olympic trampoliner starts a round by presenting to the judges. They then have 60 seconds to climb onto the trampoline and begin jumping. Once in the air, they have 10 “contacts” (times that they touch the membrane) in order to perform their set, and they are allowed to land in four different positions: feet, seat, front, and back. A routine must start and end on “feet” and competitors are allowed one free “out bounce” at the end of the routine to steady themselves. The routine is finished when they and the membrane have come to a complete stop and they have held still for three seconds. A typical Olympic format will involve two or three routines, and at least one of them will involve being able to demonstrate a specific set of skills.

There are also three basic body shapes that a trampoliner is likely to use. Tucked has the knees held tight to the chest with the hands, piked has legs and arms straight with the hands near the feet, and straddle has the legs held wide by the arms. The fourth is not official, but is often called “puck,” because it is a combination of piked and tucked. Competitors can somersault, rotate, or twist in these shapes while in the air.

Scoring is awarded based on how artistic and difficult the routine was, if they managed to demonstrate an understanding of the technical aspects of the sport, and as of 2010 based on length of time in the air.

There is actually a type of written shorthand that is used both by judges to indicate what they saw and competitors to inform judges of what their routine will contain. This written format consists of two numbers and a symbol. The first number represents the quarter rotations in a move, so 4 is one full turn. The second number is how many half twists will be in the move. Finally, either <, /, or ο will be used to indicate if the move is in pike, straight, or tucked position respectively.

Since the introduction of Olympic trampolining, medals have been won primarily by Russia, China, and Canada in both men’s and women’s divisions, with a few exceptions for Ukraine, Germany, Australia, and Uzbekistan a handful of times. In the three Summer Olympics that have featured the sport, the United States has yet to earn a medal, though they continue to build their program and hope to field a successful team in 2016.

Far from being a joke, Olympic trampolining is a serious sport with very stiff international competition. It requires vast amounts of athletic ability and is difficult to master, even with years of experience. However, if Nissan and Griswold were still alive, they would likely be very happy to see their invention finally being used in competitive sporting.