Where To Buy A Trampoline? Amazon. 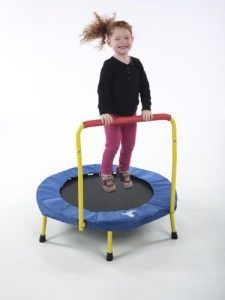 I did a lot of shopping around before I bought my first trampoline. First of all, they can be very big investments and I wanted to make sure that I got the best price. More than that, though, I wanted to have a wide selection to choose from. I wanted to know that the one I ended up buying would be high quality and safe for my children. In the end, I decided that Amazon was the best place to get a trampoline.

Start with the Drawback

Let’s start by addressing the elephant in the room: buying online means that you don’t actually get the physically see the product before you purchase it. This is the way I thought about it, too. That is, until I started going from physical store to physical store looking for trampolines.

What I quickly discovered is that I didn’t get to actually see them physically in the stores, either. Most stores don’t set up 15 foot trampolines for you to touch and try. More often it’s a shelf stacked with boxes, most of which have a picture on them. It’s very little different from looking at the products online where at least you’ll get several pictures from different angles.

Ultimately, there is no difference between shopping online and in person except that you might have to lift heavy boxes to see what’s underneath them and you have a smaller choice.

Why Amazon is the Place to Go

Even among online outlets, Amazon seems to have the widest selection and most helpful features.

For example, their robust review system gave me a lot to read so that I had a good idea of what to expect. In at least one case I saw that the trampoline that otherwise met all of my criteria had somewhat thin padding, so I was able to order additional padding to go with it. Similarly, I was able to avoid buying a trampoline that looked good until I heard about the mat wearing out for dozens of people within a couple of months.

The price also is generally incredibly reasonable and often less than half the cost of retail. In most cases they also have free shipping available. If you’re an Amazon Prime member, that becomes free two day shipping.

There are other online retailers, but few have the clout to get the kind of prices that Amazon can.

In the end, there are plenty of options for buying a trampoline, but your best bet is with Amazon in almost every case.