Why Basektball Hoops For Trampolines Are A Bad Idea 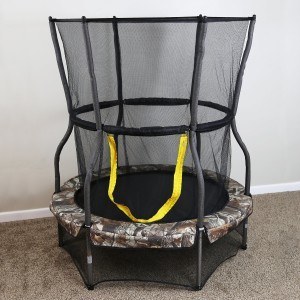 I know that a lot of parents have started to get their children basketball hoops for their trampolines, but the more that I look into it, the more that I realize that they simply aren’t safe enough to be worth it. The lengths necessary to make them safe enough often will get rid of a lot of the fun that kids can have. Let me explain why I am not sold on the idea of a basketball hoop for a trampoline.

Too Many Kids on the Mat

According to the American Academy of Pediatrics, 75% of trampoline injuries occur when there are multiple jumpers on the mat. A major contributing factor to that is that jumping deforms the mat temporarily. That’s how the trampoline works, after all, allowing itself to be deformed by your weight and then using the force of the springs to launch you back up as it returns to a neutral position. Unfortunately, deforming the mat changes the angle that people land and can launch them into one another without them realizing it.

Considering that basketball is often considered a team sport, the very nature of a hoop encourages multiple people on the trampoline at once, often in close quarters, jumping into one another.

Like any other sport, bouncing on a trampoline takes work and practice. There are simple and advanced techniques that can be learned and need to be done under very careful observation in order to avoid injury.

Unfortunately, if team playing is out, then the next most popular thing to do with a trampoline-mounted basketball hoop is to try stunt dunking. This is where the kids look for the most exciting jumps to do in order to dunk the ball. What this could possibly lead to without constant supervision is kids trying techniques that they aren’t ready for or are never safe in order to win the competition. Again, the very presence of the hoop encourages unsafe behavior.

Mostly, it’s very difficult to tell if the trampoline is in the optimal condition to be able to handle the sort of forward motion that is involved in playing basketball on a trampoline.

In standard usage, trampoline movements are up and down primarily. If the person using it moves, it’s as a result of the deformed mat and tiny adjustments we make in order to land properly. For the most part we stay in place, though, or travel through the air.

When you add basketball to the mix, though, you’re talking about significant forward motion as you start further back and make your way toward the hoop. This results in higher possibilities of slipping, shifting the trampoline, or landing improperly.

It’s also difficult to tell if the mat is dry enough for this sort of activity. While a damp mat can be bounced on normally, the chances of slips and falls increase dramatically when trying to catch traction. A mat that is dry enough to bounce may still be too wet to take it to the hoop.

There are ways to mitigate the danger to a certain degree, but not nearly enough that I am comfortable having a basketball hoop on the family trampoline here. Even being aware of everything, it doesn’t seem like it would be as much fun if you’re playing it safe and becomes too dangerous to use in a more exciting way.