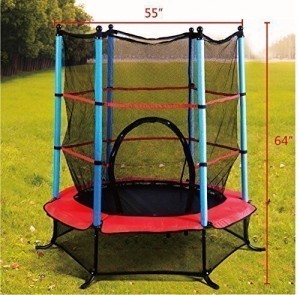 As a prospective trampoline owner with two small daughters who love gymnastics, I found myself shopping for what the little voice in my head kept reminding me might be a very dangerous item indeed. After a few sleepless nights spawned by the realization that maybe I wanted a trampoline, too, I realized that what I needed was some way of picking the best, safest trampoline available for my girls.

The next day, I started doing research, and soon found that there’s no such thing as a trampoline safety rating! For big, dangerous toys like that, I had to wonder what people were thinking. Why wouldn’t we track every aspect of trampoline safety, just like we do cars? You’d think that for a giant, expensive object generally associated with all sorts of head and back injuries, there would be some kind of oversight system.

So I went asking. Salesmen were cagey: I got a lot of marketing nonsense and awkward shuffling when I asked about safety, along with stacks of liability waivers waved in my face. I did some digging, and as it turns out, the issue is a thornier one than I realized!

As most parents know, whether or not to allow your kids on a trampoline is a matter of some controversy. The American Academy of Pediatrics outright discourages the practice, citing well over a million visits to emergency services between 2002 and 2011, but the American Orthopedic Association advocates a personal-responsibility approach, encouraging parents to take reasonable precautions. This difference of opinion in the medical community is what continues to justify lack of general safety ratings in the trampoline industry: people just can’t seem to agree, so the issue continues to go unresolved.

In order for universal safety ratings to be implemented, there has to be some legal or insurance-based precedent. For instance, cars have safety ratings because insurance companies needed a way of determining premiums and making risk-assessments. Because trampolines are less widespread than cars, they remain an afterthought in the world of medical insurance. Trampoline insurance is obscure, obviously.

Beyond that, trampolines are hard to regulate because they seldom affect people other than those using them. Trampoline-related accidents, unlike auto accidents, only include one trampoline at a time, and the only ones hurt are the jumpers. Therefore the matter of trampoline accidents is largely considered a private matter: people who choose to jump, or to let their children jump, do so at their own risk.

I was disappointed when I learned this, even though I understand the rationale. Still, I found some source of hope: there actually is a third party organization called Trampoline Safety of America that studies the technical aspects of what makes trampolines more or less safe. When I found out about this organization, I checked if their ratings were available on trampoline marketing materials online, but I was disappointed. References are spotty. Unfortunately, you have to look at the organization’s website to find safety data, but it is out there. Only some trampolines are reviewed, so I narrowed my search to ones that were rated.

With my little ones hounding away, I already had a certain sense of what to look for when I started shopping: a net, but not with wide holes; a trampoline wide enough that there would be no airborne collisions if they both jump at the same time; and springs, weave, and materials that will limit how far up they’ll jump, enabling controlled descents–they may do gymnastics, but I don’t want them falling much higher than they’d fall in gym class, whether they realize it or not!

All the same, there’s only so much a layman can think to ask about, and the true safety of a trampoline is often a question of who might be using it. That’s the crux of the problem: the safety of any given trampoline depends on the decisions made by the jumper, along with their weight, height, coordination, and practice. Jumping with multiple people adds another dimension to the problem: how can trampoline manufacturers control the consequences of two or more jumpers bouncing at once? The answer is that they can’t, which means that manufacturers must pass on liability to the owners, who control how the trampolines are ultimately used.

It’s good news for them, and another point for parental responsibility. I won’t be letting those kids out of my sight for a minute when they jump, but I can’t say I won’t enjoy watching them. Who knows, I might even try it out myself. Can you blame me?